Spartan Wrestles His Way to State as Freshman

Freshman hopes to make first of many trips to state meet 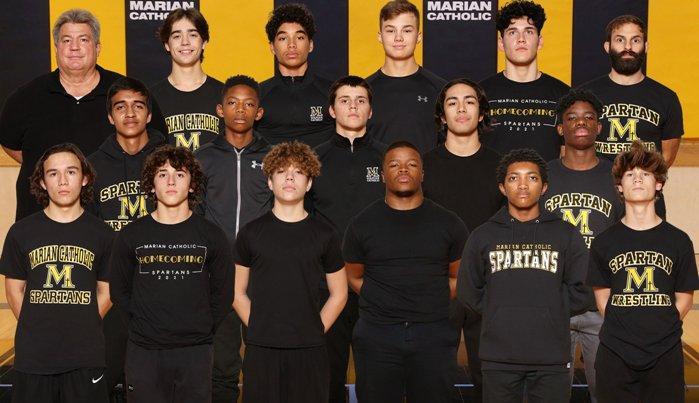 Baranski's work means Spartan wrestling should have success for years to come.

Marian Catholic Spartan Joey Baranski worked his way to Springfield ahead of a snowstorm and to the surprise of no one.

On Wednesday, Baranski joined Senior Mia Lockett in making a celebratory walk through the hallways to the cheers of Spartan classmates to acknowledge an accomplishment. Both students made it to the state tournament in their respective activities – Lockett in Speech (Original Comedy) and Baranski (Class 2A, 126 lbs.) in wrestling.

The state meet as a freshman? That was no surprise to his coach.

“Not surprised that he made it to state but we were kind of surprised at how well he wrestled, especially being so young he handled the pressure better than we expected,” said Spartan Wrestling Head Coach Dan Jordan.

Baranski qualified for state at the Brother Rice 2A Sectional over the Feb. 11-12 weekend.

According to Jordan, Baranski has been a great addition to the team in his first year.

“Joey is a great teammate. He acts the same around beginners as well as experienced wrestlers, willing to help anyone one of his teammates if he can,” Jordan said.

Baranski qualified for state at the Brother Rice 2A Sectional over the Feb. 11-12 weekend.

Jordan hopes this may the first of many trips by the freshman to State.

“Joey is on track to be a really good wrestler,” Baranski said, “and an even better young man.”