A Behind the Scenes Take On Broadcasting 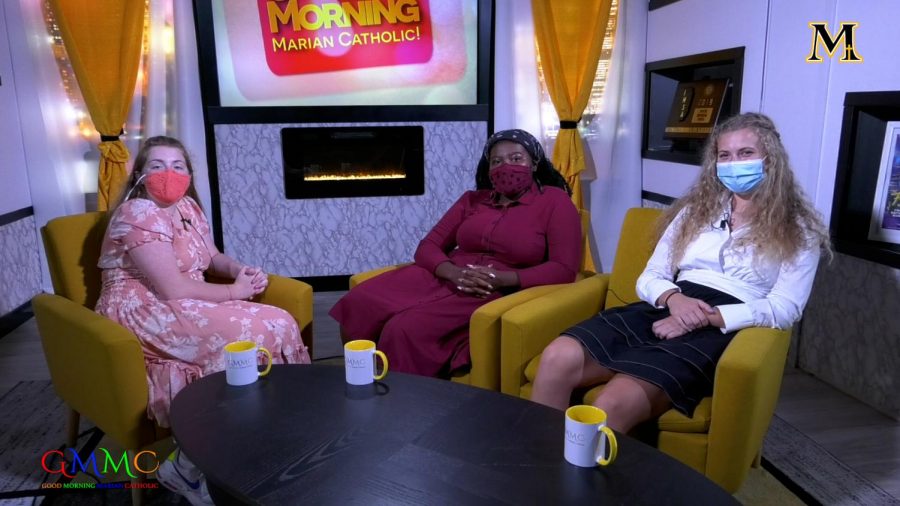 Watch as junior Haley Trojan, dressed as Alice from Alice in Wonderland, joins with sophomore Jared Smevoll cloaked as the Mad Hatter in the kitchen to make Halloween cookies.

No, you haven’t gone down, down the rabbit hole. Instead you’re tuned into a feast for the eyes.

Listen as Trojan recounts years of  Halloween costumes past from the really good to the hilariously bad. Haley remembers becoming Elvis in the Fourth Grade.

Celebrate as “Good Morning Marian Catholic” gets back into swing offering a comedic take on Halloween spookiness.

Modeled after morning TV news shows, “Good Morning Marian Catholic,” a monthly news magazine/talk show produced by Marian Catholic News (MCN) has been on the student menu for three years, with students stepping up to take responsibility for the show in front of and behind the camera.

This is Haley’s first year with the program. Her sister, Taylor, was active in broadcasting at Marian Catholic for all of her four years at school as part of the show.

With the steady support of faculty moderator and chief editor Mr. Cassidy, the show gives students an opportunity for self-expression and a chance to learn video production skills. That was the idea from the very start.

“The initial idea for MCN was to have the TV class students do a weekly news show, which they did. The initial version of the news was called ‘Good Morning A-Marian,’ ” Cassidy said. “Once we had enough students involved in the Broadcast Club, we moved the news into an afterschool program and renamed it the ‘Marian Catholic News,’ ” he said.

Other shows have sprung out from MCN’s efforts including “Spartan Center” – like ESPN’s “Sports Center,” “Inside the M,” “Swish,” a basketball show and “Speaking Spartan,” a Marian Catholic coach’s show. MCN also covers numerous Varsity contests each year.

When it comes to “GMMC,” the format includes school news, local news, national news, weather, sports and a humorous feature. The variety of content, Cassidy said, is what helps to make the show special.

“We are doing something here that not many schools are attempting,” Cassidy said in a email interview. “Many schools do news shows and some even include interview segments but very few if any schools are doing a show with a variety of segments that showcase their students on a monthly basis.”

For the next episode, there will be a musical guest: Senior Logan Driver, a member of the school’s Gospel Choir.

Listen as he sweetly serenades. You’ll want to sing along.

Don’t forget about those cookies in the shapes of pumpkins and black cats.

The show has captured the general ambiance of Fall to help us get ready for the cold winter ahead. While it’s a bit ironic, each year we start the school year with Autumn and scares.

Stay tuned as the show segues to more segments on the school’s Facebook page. (Find the link below.)

Junior Abby Urban has been involved with the program for more than a year.

“I started when we were in quarantine as the Weather Person,” said Urban.

But when former MCN host and now alumna Tamera E. Trimuel (‘21) left the show to promote her bestselling book, Urban took her seat behind the anchor desk. Urban also produces and books guests for the show. Urban’s co-anchor is Delcena Sawyer. Haley Trojan serves as both the Sports Anchor and the color analyst for sports. Matthew Peters is the new Weather Person.

“The best thing about the show is that we get to hear from students throughout the school and learn about them,” Urban said, who is also active in speech and theater at school. “I like the Spartan spirit of it all.”

Want to see what it’s all about?

Here is the link for the first show. https://www.youtube.com/watch?v=unkhwjuzOkA&t=30s