Megaphone Memories: That One Article About Race

Does White or Black Matter at Marian? Did It Matter in '92? Does it Matter Now? 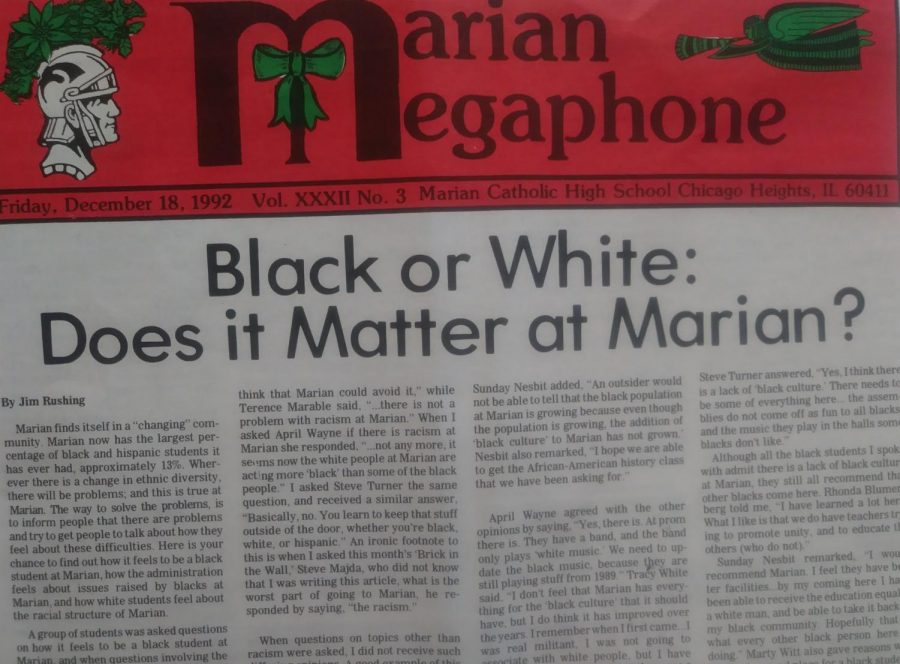 Black or White: Does it Matter at Marian?

That was the headline for the front page of the December 18, 1992 edition of the Marian Megaphone. And yes, it’s about exactly what you think it’s about.

The headline spread across the folded broadsheet page below a special red and green colored newspaper masthead to mark the Christmas season.

“Marian finds itself in a ‘changing’ community.”

The story begins with the statement that the percentage of “black and hispanic [sic] students” at Marian Catholic had reached an all time high: a whopping 13%!

The writer also stated that. “Wherever there is a change in ethnic diversity, there will be problems; and this is true at Marian.”

The writer continues, “Here is your chance to find out how it feels to be a black student at Marian…”

The student body at Marian currently consists of 30% Caucasian/European students, 40% African-American, 15% Hispanic, and 15% Asian, Pacific Islander, Native American, or Other. That’s right, black students are now the majority. And remember, the Megaphone statistic included both black and Hispanic students.

Full disclosure: She’s my mom. As Class of ’91, she graduated the year before the article this particular Megaphone article was published.

“There were 15 black kids in my graduating class of 310 students. When I was there, we were fighting to get an African-American history class, but most colleges wouldn’t have counted it as a credit,” Bobbitt said. “We had just started the first club for black students, which at the time was called Vision. I was the only black person on the speech team. Racism was very prominent when I was there. I was hesitant to put you and your sister through Marian because of how horrible my experience was, but I’ll admit you’ve had it much better than I did.”

While far from perfect, Marian has made huge strides in terms of diversity and inclusion. We now actually have an African-American history class, as well as both a Black Student Union and -starting this year – a LatinX and Hispanic Student Coalition.

When The Spartan Star was created, one of the suggestions was to connect to the history of the Megaphone, as if to preserve a history of integrity. I don’t personally think a white writer referring to African-American students as “blacks” shows much integrity in the year 2021.

It’s a different time, none of us read physical newspapers anymore.

As we prepare to enter the year 2022, we should stop trying so hard to preserve what was, and adjust to what is.