Will Meta Make It to the Mainstream in 2022?

Rather Than Peace, This Meta's Made To Dominate 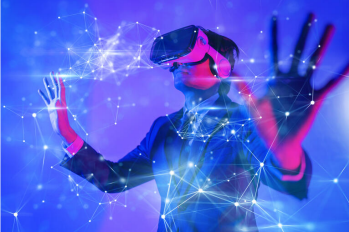 Are you ready to get “Meta”? Mark Zuckerberg sure hopes you are.

Meta is the rebranded parent company of Facebook, the social network preferred by grandparents when it comes to posting pictures of Christmas presents.

Thanks to Facebook and Instagram, neither Khloe Kardashian or Chloe Bailey are new to you, so let’s put Oculus into focus.

Oculus is a primary focus of the Metaverse. The hope is to make the online Virtual Reality/Alternative Reality (vr/ar) gathering spot.

The closest comparison I can come close to describing the feeling is this: Image an online mall where you can buy online things and see ar things from Amazon, and on and on.

Consider this definition from the place everyone goes to first for understanding: Wikipedia.

As follows, “The meta verse is a hypothesized iteration of the internet supporting online 3-D virtual environments through personal computing, as well as virtual and augmented reality headsets.”

As a gamer, Facebook’s purchase and application of Oculus, has many of us as vr users worried of an eventual Meta monopoly though the juggernaut claims “many companies will be able to take part in the meta verse.”

Oculus already has a small monopoly to it as most exclusive titles go to Oculus for: 1. their cheap headset 2. Big user base and 3. Easy to develop platform.

While gaming should not take too much of a hit because of Meta it’s only recent since the “plans” have been revealed.

On a virtual land and shopping perspective there have been people and companies who’ve bought land and NFTs (or Non-fungible Tokens) in this virtual space.

As it’s being called virtual real estate a virtual plot of land known as Decentraland sold for $2,430,000 $2.43 million. “It’s a 116-parcel estate in the heart of the Fashion Street district” of Decentral land for 618,000 mana or the cryptocurrency of the “digital world.”

As stated by Sam Hamilton, the head of the Decentraland Foundation, “Fashion is the next area of growth in the Metaverse.” Publications like the New York Post and other news organizations have reported that various luxury fashion houses including Gucci, Burberry, and Louis Vuitton have “flirted” with meta for NFTs as part of the trend.

If this is your first time seeing or reading about Oculus, consider yourself lucky.

Facebook – or Meta – is in the midst of targeted advertising in the Metaverse and about it on cable TV, Internet and the metaverse itself. Tigers and bears suddenly spring outside of framed pictures. Along with concerns about persistent advertising, some communications experts are worried about feeding existing addictions to social media conjuring comparison to the novel/movie “Ready Player One.” This kind of fear leads to a dystopian future where if real life is too intense, people might opt to stay virtual. Such a dire choice is what would lead to another media monopoly.

Personally, I think the Metaverse is really cool as an idea, although its connection to the former Facebook and that CEO’s tendencies toward the pursuit of monopoly is worrisome.

At this point, the concept of buying virtual land or NFTs seems really stupid to me since I’m not yet at the level of money laundering for the rich.

Despite the ongoing advertising blitz, I predict that it will take time for the Metaverse to break into the mainstream of everyday technology where you’d find ar embedded in the frames on a spinning rack of readers at Walgreens or CVS.

Remember Google Glass? It’s probably on the shelf next to the portable Zune player.

Ar and Meta probably have a while to go before they become as common as the smartphone.

Meanwhile, there is time for some to develop our real selves before we go virtual.