Side Out, Season Out for Volleyball Seniors 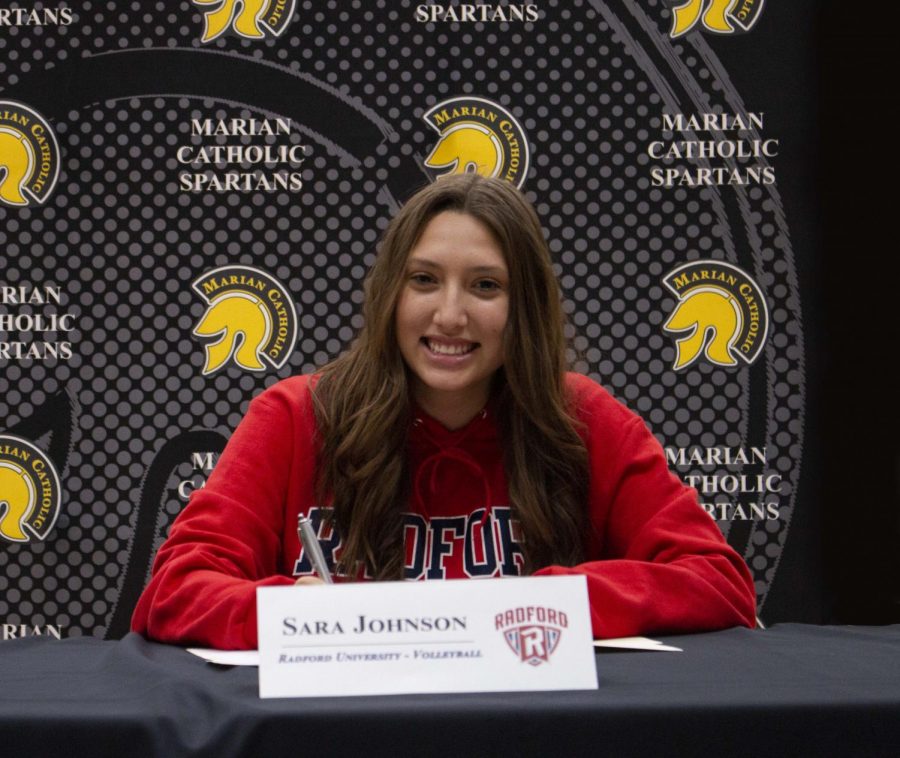 Senior Sara Johnson signs her letter of intent to play for Radford University next year.

Our Lady Spartans had an amazing season this year, ending their regular season with a 16-15 record.

Individually, the squad was led by their talented co-captains, Erica Sledge and Sara Johnson.

Both had a really good season; Johnson has already committed to play at Radford University, as part of a D1 volleyball program.

Collectively, the Marian Catholic volleyball team went far in the IHSA Playoffs this year. This year Marian hosted their Regional tournament where our team faced Hillcrest and won in an incredible 25-5, 25-4 game for the Spartans. This put them straight to the regional championship where they faced Hinsdale. They won in a 25-11, 25-11 sweep, earning them the IHSA Regional Championship Title.

At IHSA Sectionals in Hinsdale, the Spartans first faced Lemont in the Semi-Sectionals, where they won in a heated three sets. But ultimately, the team lost to Joliet Catholic Academy, 25-8, 25-18 in the Sectional Championship match.

“I know it sucks the way we went out,” Johnson said, “but we really put our all into this season, and I know personally my four years playing Marian Volleyball have brought me lots of new and amazing friends, and really contributed to who I am as a person overall.”

Polewaczyk had a slightly different take on the year.

“I enjoyed playing with my teammates and I am going to miss them all, on the court and off, when we graduate. I am so proud of how far we got this year!”